They remain in readiness and vigilance to continue their struggle.

On Wednesday 6/6/18, dockworkers at Piers II and III of the Container Terminal (SEMPO) of “COSCO” at the Port of Piraeus successfully carried out yet another strike from dawn. That same day the bosses agreed to begin negotiations to sign a Collective Bargaining Agreement, while employers and the competent ministries pledged to include dockworkers in the category of heavy and unhealthy occupations.

Following this positive development, the workers were informed by their Union and they returned to their posts, suspending the strike mobilization which was underway, while emphasizing that they are in a state of militant readiness for the implementation of the commitments that were pledged.

A new strike for Wednesday 6/6 has been called by the dockworkers in Piraeus.

The government has great responsibility for the attack on the right to strike.

Well-coordinated and with their heads held high, dockworkers from Piers II and III of the Container Terminal (SEMPO) in the Port of Piraeus returned to work late Friday night, 1/6, having completed almost three 24-hour strikes. In the previous days, with unending ‘carbon-copy’ decisions and pushing through  proceedings at top speed, on Friday the court ruled ‘illegal’ both the strike that was called by the Labor Center of Piraeus and their union.

However, the employees at their General Assembly decided to suspend the mobilization and proceeded to declare a new strike for 6 a.m. Wednesday 6th June. The decision was taken unanimously at a new mass General Assembly that took place at the gates of the “COSCO” monopoly installations in the port.

Through their struggle, the workers sent a clear message to the bosses and the government that they are united and determined to continue their struggle for the signing of a satisfactory Collective Bargaining Agreement, for permanent stable work with full labor rights, for their inclusion in the category of ‘heavy and unhealthy occupations’ and for health and safety measures in the workplace.

The decisiveness of the workers crushed whatever effort was made to set up a strike-busting mechanism, turning the court decisions that characterized their strikes as ‘illegal’ into a worthless piece of paper, sparking off a wave of solidarity and revealing in the eyes of all workers what government and capital mean when they speak of ‘just development’. 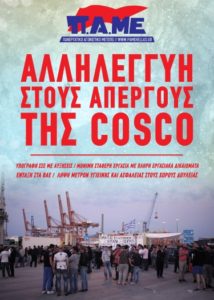 The President of the Labor Center of Piraeus, Nikos Xourafis in his greetings to the great strike struggle waged by the workers, warned the bosses not to “dare touch a hair on the head of a striker”. The General Assembly concluded in a climate of enthusiasm, with slogans and vigorous applause.

From the employer’s side, on Friday they proposed to the workers to ‘commence a dialogue’, with the condition that they stop the strike, with the first meeting to be held on 25th June. The workers rejected the proposal.

In a statement by the All-Workers’ Militant Front (PAME) it denounced the court decision of the First Instance Court of Piraeus on Thursday that ruled illegal the 24-hour strike by the “COSCO” monopoly and Piraeus Port Authority workers, as well of the Labor Center of Piraeus.

As it stresses in the statement: “A new black page has been added to the anti-labor bible of the so-called ‘independent’ Justice. The decision of the Piraeus Court of First Instance that raced to issue an injunction in just a few hours against the just struggle of the workers, to declare the strike “illegal and abusive” is abhorrent and shameful, adding; “The government is complicit, because it implements all the decisions of capital. It holds great responsibility because it puts forwards legislation and argumentation, shielding big business, fortifying it against the workers and their struggles.” 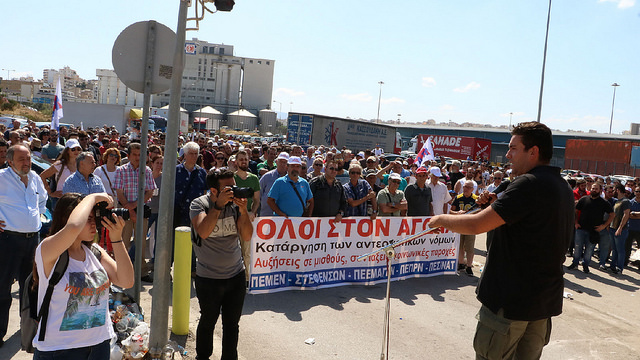 On Wednesday, 30th May 2018, a 24-hour Pan-Hellenic strike took place in Greece. The struggle for the organization of this strike was particularly tough, since the compromised leaderships of the GSEE-ADEDY confederations, although they called a strike, did everything for its failure. Thus, the compromised trade union leadership of GSEE and ADEDY called upon workers to demonstrate and strike for “boosting entrepreneurship and innovation”, i.e. to demonstrate for the demands and context of the OECD, the IMF, the EU, the ECB, the Memoranda and the Government. And they called this a “national plan”!

In contrast to the compromised leaderships, the class-oriented trade unions, rallying around PAME, have put forward a framework of demands and claims which bringsthe needs of the workers and their familiesto the forefront, they take a stand against employers and governments. The latter, in the name of supporting business profits and competitiveness, intensifies the attack on the working class.

PAME held strike gatherings in 67 cities in Greece with the following demands:

In Athens, thousands of workers, unemployed, youth and retired people participated to the demonstration of PAME, under the slogan: “Your growth is crashing our lives! Struggle, organization and counter-attack is our choice! “.With this mass demonstration in Syntagma Square , outside the Parliament, under this slogan, strikers from dozens of sectors responded to the government and business group’s “growth plans”, as well as to the forces of employer-led and government trade unions that want to put the workers behind the “national goals” of the monopolies. “No more modern slavery, the workersdemand permanent work”, “No to consensus and submission, disobedience and class struggle”, the strikers shouted out loud.

Speaking at the strike gathering in Athens, GiannisTassioulas, member of the Executive Secretariat of PAME and president of the largest sectoral federation of the country, the Federation of Construction workersof Greece, noted among other things: “The government has acquired the talent of turning black into white on behalf of the capital. The capital, the government, the bourgeois parties and their forces within the labour movement will find us facing them all.

The government’s fairy tale about the “fair” growth, the “end of the memoranda,” about “returning to regularity” cannot even fool a young child.

What kind of “fair” growth is this, with hundreds of anti-labour laws in full force and permanent for many decades to come?

What kind of “fair” growth is this, which is accompanied with the privatization of ports, airports, lignite units?

With these privatizationswill workers have better wages, better working relations?

Because of the fact that the government is also trying to fool us about the privatization of the “utilization of public property”, does not mean that the workers, the poor people, will benefit. We will pay more, we will work more cheaply in order for the big businessmen and the so-called big investors to fill their treasuries.

What “regularity” and “return” are they talking about? Will they make up for the losses we had? Will pensions, retirement age limits come back? Will we get rid of ENFIA and heavy taxation? “.

As G. Tassioulashighlightened: “There is a potential for our families to be able to live better, meet their needs, and move our lives to a real higher level. All the wealth passes through our hands, with our work we build giant buildings, bridges, factories, we produce everything and we are condemned to live in poverty and tolerance. We do not compromise with the present and the future that the governments, the parties and the forces of the capital are planning for us. We will fight to the end. This is for sure. This is encouraging. “.

It should be noted that in all PAME demonstrations the speakers condemned the participation of the Greek government to the imperialist interventions and wars, and they also criticized the trade union forces which align with the so-called “social consensus” and in practice sabotage labour struggles and demands.

The GS of the CC of the KKE Dimitris Koutsoubas attended the PAME strike gathering in Athens, where he made the following statement: “No illusions. The anti-popular attack will continue. SYRIZA and ND are trying to hide their strategic alignment through fake confrontations, through false promises. The workers’ – popular movement must now be regrouped so that it will take the case in its own hands, with a strongKKE “.