PAME expresses its condolences to the families of people who have lost their lives, whose numbers are constantly increasing. We express our sympathy for the wounded and the victims of the fires.

Despite the titanic efforts of firefighters and volunteers who are fighting against the fires and for the evacuation of those stranded, it is obvious the lack of central planning, of coordination, the lack of measures for firefighting and of fire protection.

Those are issues that have been raised by the class trade union movement repeatedly and in a particularly intense way in the past as a priority for the protection of working people’s life and unfortunately today their absence contributes decisively to the loss of human lives in an inconceivable tragedy.

The government must immediately take all necessary measures to meet the initial needs of those affected. 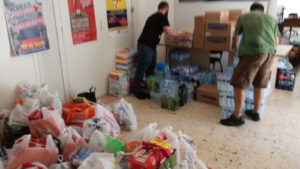 PAME will directly address on the causes and responsibilities, as well as for the relief of the people affected.

At the moment, priority is the help, the organization of substantial and immediate solidarity. PAME calls on the trade unions to immediately organize their practical solidarity with the inhabitants and those affected in the areas, and to contribute and help in any way alongside the fire-fighting forces.

PAME has called the class Unions of Greece to organize immediately the gathering of material aid for the victims of the fires. PAME also issued an urgent call to the workers for blood donations for the burn-victims, as there is great demand for blood in the local hospitals.

Already many Unions have started the gathering of water, food, medicine and baby products for those affected. The Regional Trade Union Center of Lavrion, member of PAME, which is in the affected areas, has been since the first hours of the fire in the front line to assist the firefighters and the victims. Unfortunately, the number of the dead is increasing constantly.

PAME thanks the unions from many countries and the World Federation of Trade Unions, who have expressed their condolences and solidarity.

PAME and the class unions have organized a mechanism to support and help the victims of the wildfires.

Yesterday, Wednesday July 25, PAME delivered to the Regional Trade Union Center of Lavrio the 1st part of material aid that was gathered in Athens. Hundreds of class Unions also are gathering material aid, which is being distributed by the local aid center that was created by the Regional Trade Union Center of Lavrio. Also, great number of workers responded to the call of PAME for blood donations for the victims.