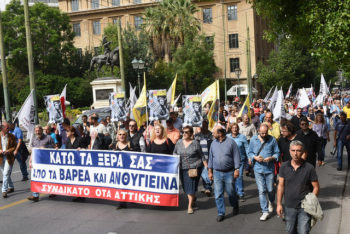 The Executive Secretariat of PAME calls every trade union, every worker in all sectors in Greece, to participate in the General Strike on the 8th November and to organize the discussion in all workplaces on how the working class should fight against the policies imposed by the government and the employers. The trade union leaderships must organize the struggle in every sector, every working place, every region, they must take initiatives for the preparation of the strike.

The time has come for the workers to rise up. It’s time for us to have a coordinated struggle. Workers cannot bear any more tolerance or waiting. We have to respond to the lies and illusions we are told by the government of SYRIZA-ANEL and Nea Dimokratia, the leading party of the opposition. No one else can solve our problems in our place. Problems created by the anti-people policies of the governments, since the beginning of the crisis, unless we organize massive, decisive struggles under the slogan:

OUR NEEDS IN THE FRONTLINE-NOT THE PROFITS OF THE CAPITALISTS

Only the power of massive, class struggle can give hope, determination and prospect for a better future. We call the workers to support the forthcoming mobilizations that the Trade Unions in many sectors have scheduled.

4, October, The National Federation of Workers in Bottled Drinks in Northern Greece, against the prosecution of trade unionists in Coca-Cola.

4, October, Rallies of Pensioners in many Greek cities.

5, October, Strike of Doctors in Public Hospitals, who demand rises at their salaries