PAME denounces the operation to silence Italian workers and their right to fight for the protection of their health and life.

Specifically, the so-called “Strike Rights Guarantee Committee” (CGSSE) moved legally against the USB trade union on the occasion of the strike on March 25th. CGSSE claims that calling a strike during a pandemic contributes to creating a wider climate of insecurity and innumerable damage to the community as well as to businesses

In these difficult conditions, the attack on employers and the government against the Italian militant unions, against USB proves that in order to secure the profits of the industrialists they do not stop in front of anything.

Workers in Italy, mainly doctors and health workers, went on strike on March 25 demanding the closure of unnecessary industries that have been turned into death centers in northern Italy. Indeed, doctors who have been struggling with death for weeks on went symbolically been on strike for 1 minute with the message “I can’t strike, do it for me” pointing to the importance of taking steps to protect workers’ and peoples’ lives.

Developments reveal that even in pandemic, industrialists and governments are taking advantage to promote measures to limit workers’ rights.

Instead of quarantining large industries that murder public health, they seek to quarantine workers’ rights. They want to silence the right of workers to complain and to take measures to protect their health and rights. Developments in Italy reveal the hypocrisy of the calls for “national unity” but also the repeated declarations of “individual responsibility”.

It is the responsibility of the state and governments to protect public health by shutting down industries and businesses that engage in mass crime against society.

We express our solidarity with the USB trade union and the great fight it gives to defend the lives and health of Italian workers and condemn any persecution against militant workers and trade unions. 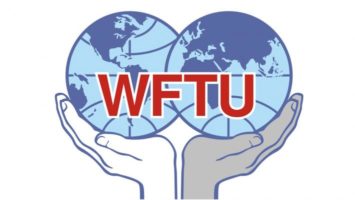 WFTU: The Guarantee Committee sanctions USB and promises restrictions on strikes, it will be a battle for freedom and democracy.

With a deliberation of 10 pages the Cgsse (strike guarantee commission)opened the infringement proceedings against the USB Confederation for having dared to proclaim a general strike in defence of the health of workers and citizens on 25 March, limiting the duration in essential services such as health care, population relief, firefighters, urban hygiene and assistance cooperatives to just one symbolic minute.

After having listed a long string of rules that USB would have violated and for which it must be sanctioned economically, the Guarantor (of whom, of what?) launches into considerations about the advisability of proclamations of strike in a context of proclaimed health emergency … “as it contributes to generate a widespread sense of insecurity and to produce incalculable damages to the community, determining an unacceptable burden on the institutions and/or companies…”. risks thwarting the containment actions of recent government measures.”

Evidently the guarantor Giuseppe Santoro Passarelli did not understand that our strike was proclaimed and was held exactly because there was already “a widespread sense of insecurity”, generated however precisely by the government measures mentioned in the resolution.

The reason why USB proclaimed the strike was in fact the choice of the government – blackmailed by Confindustria and backed by the accomplice unions – not to immediately close down every production site and every company or office not useful to guarantee the safety of citizens and the functioning of the health system!

One is accused of having done exactly what it was necessary to do: to ask that health come before profits, making the “widespread sense of insecurity” generated by the very measures of the government that USB contested and still contests.

USB has for years been at the forefront in denouncing both the content of Law 146/90, which in fact has led to the impossibility of acting on the trade union conflict in the forms and ways useful to a normal dialectic between the parties, and the role of gendarme of the employers’ interests interpreted by the Commission.

Announced urbi et orbi the incoming flogging by USB,strike guarantee commission has then dedicated with his own writing to preempt harsh and large conflicts when, after the emergency, the clash will become acute to define who will have to pay the costs of the coronavirus and already promises even stricter rules to ensure that it is the workers to succumb.

For years we have been fighting against unacceptable government measures and employers’ abuse, and we do so with our hands tied behind our backs thanks to the infamous Law 146 of 1990, shared and supported by those trade unions that have preferred complicity and subordination to conflict. The right to strike must be defended to the bitter end and it is only possible to do so by practicing it, as USB does and will continue to do.

That is why we reject the threatening words of the guarantor, accept the challenge of the Commission and claim all our choices. Our defence will be a battle for freedom and democracy, for the restoration of the right to strike, against the progressive dismantling of constitutional rights, because in the conflict between capital and labour it is labour that needs protection instruments, not capital.